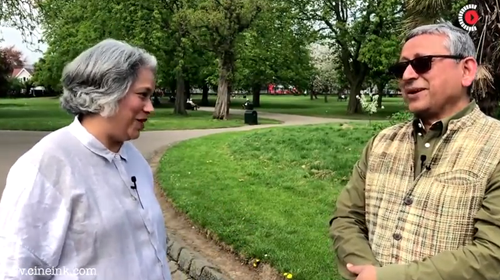 ‘India is a secular democracy but PM Modi, his party and the RSS would like to turn it into a Hindu Rashtra. The government is discriminating against all minorities and Dalits,’ says Gita Sahgal, human rights activist and filmmaker, in an interview with me for Cine Ink, a digital media platform for radio and television interviews, based in London.

Ms Sahgal raises several issues in her interview ranging, from the plight of Kashmiri Pundits to the ‘collusion’ of Congress leaders in the anti-Sikh riots of 1984. The video is available on Cine Ink website: www.cineink.com.

‘Indians led the movement to establish human rights charter but, now in India, some people have forgotten conscience and reason,’ Ms Sahgal says.

Referring to the rape and murder of an-eight-year-old girl in Kathua, Jammu, she says ‘we are becoming a country where (some) government officials are violating human rights while (some) lawyers are covering up. There’s collusion.’

She denies that she has been selective in her criticism of PM Narendra Modi and his government. ‘My mother (Nayantara Sahgal), Naani (Vijaylakshmi Pandit) had protested against Indira Gandhi at the time of Emergency.’

Her mother Nayantara Sahgal was one of the authors of the PUCL (People’s Union for Civil Liberties) report, which spoke out in no uncertain terms about the anti-Sikh violence of the 1984, she argues.

Gita Sahgal acknowledges that there was collusion between the rioters and some congress leaders during the anti-Sikh riots after the assassination of Mrs Indira Gandhi on 31 October 1984.

Discussing Kashmir, Ms Sahgal says ‘firing deliberately into the eyes of the children is absolutely wrong. The same thing is happening in Gaza where Israeli army is firing at children, women and journalists.’

‘But, it’s equally wrong that till now human rights organisations have not written a single report about the plight of Kashmiri Pandits,’ says Gita Sahgal.

She admits ‘there was a time when it was considered to be politically incorrect even to talk about the plight of Kashmiri Pandits.’ She adds, it would be wrong to put all blame on the then Lt Governor of Jammu and Kashmir, Mr Jagmohan, for the forced migration of Kashmiri Pandits from Kashmir valley.

Gita Sahgal is the former head of Amnesty International’s gender unit but was suspended in February, 2010, after a very public and acrimonious dispute with her bosses.

Talking about her dispute with the Amnesty, she says she had objected to turning Moazzam Begg, a former inmate at Guantánamo Bay, into a hero. ‘Begg’s rights were violated but he admired Taliban controlled Afghanistan as the perfect Islamic state and took his family there. He was not a hero,’ Ms Sahgal says.

Gita Sahgal was member of the production team on The Bandung File, a multicultural current affairs/documentary programme on British TV Channel 4, presented by Tariq Ali and Darcus Howe.

Gita Sehgal is the daughter of novelist Nayantara Sahgal, grand daughter of Vijaylakshmi Pandit and great-niece of former Indian prime minister Jawaharlal Nehru.
The interview with Gita Sahgal was recorded in London on 21 April 2018