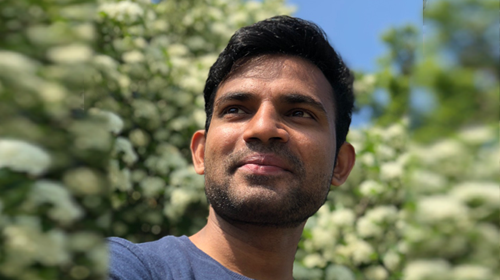 As a student of MA in Digital Media at the Metropolitan University of London, I was asked by my teacher and supervisor, Giles Askham, to suggest a theme for my final project. And, I uttered just three words- ‘The Digital Migration’.

Little did I know, I would end up reading hundreds of news stories and working day and night for at least three months on the subject. The project took me to India for a month. So, how do I feel? Not bad, as they in London.

As size of revenue for digital media expands in India, ‘The Digital Migration’ seeks to analyse why and how the digital transformation is taking place in the Indian electronic media. I mainly focus on the conventional media i.e. news and television and the digital platforms such as YouTube, websites and Online Portals. The film explores the journey of some of India’s top television professionals to the digital world.

‘Digital Migration’ talks to TV anchors, executives, mass communication students and others to find out about their understanding of emerging media platforms in India.

I enjoyed spending time with some of the very bright students of School of Journalism and Mass Communication, Apeejay Stya University.

Pankaj Pachauri, who has launched his own company Go News, a digital platform of news, admits that the conventional media has lost its sheen but he is realistic in his assessment.

“India is the only market where print, television, and digital media all three are growing,” he says.

“Escapism, criticism, critically examining the performance of the government; these are things of the past. On the contrary, I see many anchors on the programmes praising the government. I don’t think it is the job of independent free media to represent the government. Government has its own organ; it has its Doordarshan, Directorate of Audio Visual Publicity, it has a Prasar Bharti. It has lots of other organs also. So private media, which is supposed to be an independent fourth pillar of democracy, has virtually collapsed,” argues Mr Dua.

Abhisar Sharma feels the same. “Conventional Media is losing sheen because a section of the media has suddenly turned as spokespersons of the current establishment. I mean they do a better job than the spokespersons of the government, of the political party,” says Mr Sharma.

Rajesh Priyadarshi has seen the digital world from a close quarter. He says, “Digital Media is emerging as an alternative media- alternative to print and television, because of ownership issues, because of political interference, big companies and market forces.”

Former Director General of state-controlled television network, Doordarshan, Vijayalaxmi Chhabra is optimistic that the conventional media too would adapt change.

“Any new discovery or any new thing is never a threat, it’s a progression. Television wasn’t a threat to radio. It was a different medium. There was no need for radio to feel threatened. Radio had to find a separate corner for itself. Similarly, radio, television and newspapers have to co-exist, probably, have to make themselves more pacy, and they have to have their own digital platforms,” says the former DG, DD.

Mili Agarwal wears many hats. She’s an academic, fashion blogger and radio tv producer as well. She says “I won’t say that conventional media will die out. I mean conventional media especially if you talk about India- Print media and all- it’s been on a rise, radio, television and newspapers- it’s been rising in India. It wouldn’t die out, but definitely digital media has given traditional media more healthy competition, I would say. So it’s a win-win situation for the audiences, because they are spoilt for choices. So even now, traditional media can no longer be complacent. It has to raise its game.”

Youngster Malvika Kodiyath, a student of journalism, knows where her loyalties are. “Digital Media is the future. It is very important for all of us today. What I could tell is being a part, and having had internship with several digital media organisations, what we have understood is that our main agenda is to put the news across to the people without any biased decisions and let them be the judges on what news is like. I think that is the most beautiful thing about digital medium. You let the audience decide,” says Ms Kodiyath. Her classmate Supreet Aneja agrees with her. She too has started specialising in digital media.

“For me, digital media is present and future. Why? Because, I’m not even a graduate right now. I am in my third year, and I did my two internships and it was because of digital media that I could do it independently. I didn’t have to depend on the camera person to go out with me. I could cover the stories, I could do Vox-Pops, and the best part is; it’s immediate,” says Ms Aneja who’s quite upbeat with digital media.

Even though, she comes from Doordarshan, Vijayalaxmi Chhabra is quite upbeat. She cautions the digital media advocates.

“Viewers are definitely shifting to digital media, but to what extent advertisers are shifting that you need to look into. The advertising revenue is expected to be 65000 crores in 2020. In 2018, it is 61000 crore as against 5000 crore in 2017, so look at the gap. The advertisers are not going to shift; they will probably have additional budgets. They have not yet started shifting complete money from conventional medium to digital platforms. They are spending money, but it’s not a huge amount of money as of now,” argues Ms Chhabra.

That was just a sample of the debate on my documentary. Later, the arguments become sharper and answers more analytical.

According to India’s National Association of Software and Services Companies (NASSCOM), the internet industry in India is likely to double to reach US$ 250 billion by 2020, as the number of internet users in India is expected to reach 730 million by 2020, supported by fast adoption of digital technology (IBEF, 2018).

In November 2017, the international business television, Bloomberg broadcast a report saying that in the race to go digital, businesses evaluate India’s Silicon Valley, Bangalore, the best host among 45 cities worldwide. Against this backdrop, let’s look at the Indian Media and Entertainment (M&E) industry, which is driven by increasing digitisation and higher internet usage over the last decade.

According to the report on the industry, released at the FICCI-IIFA Global Business Forum in New York, growth in digital media businesses would far outpace TV, print, radio or music concerts.

NDTV (New Delhi Television) fired around 70 staff members across the country. The Editor of the company said the Channel was shifting to MOJO, Mobile Journalism.

The Digital Migration, a documentary film, produced by me is a part of my masters degree requirement at the Metropolitan University in London.