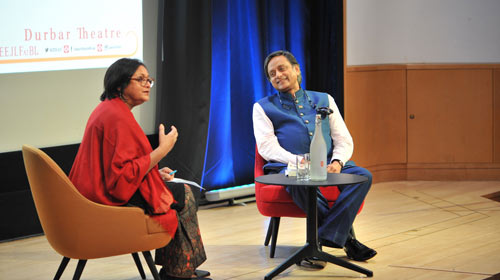 JLF has given birth to 123 literature festivals across the world…

London- For literary enthusiasts, all roads lead to Zee Jaipur Literature Festival (JLF) at British Library in London. JLF@BL, as expected, is drawing large crowds. The opening session on 8 June- Why I am a Hindu- with Congress MP and author, Shashi Tharoor in conversation with Namita Gokhale, author and JLF Co-Director, was a cracker.

Cine Ink has interviewed Namita Gokhale and Sanjoy K. Roy, Managing Director of Teamwork Arts which produces over 25 performing arts, visual arts and literary festivals across 40 global cities, including JLF. Both talk about the challenges that they face before mounting a literature festival of this magnitude.

Talking to Pervaiz Alam from Cine Ink, Namita Gokhale, JLF Co-Director, said: We do not compromise with the editorial integrity of the festival due to any outside influence, including sponsors. Our sponsors do not interfere in our editorial selections. In fact, writers tell us that they do not get the kind of freedom of expression at other literature festivals that they get at the JLF.

Writers benefit from our festival immensely. Hundreds and thousands of books are sold at the venue. People get a chance to meet their authors. If they like them, they order books from Amazon and other outlets. The impact of JLF on readers as well as writers is quantifiable.

We can’t invite all the writers all the time but when it comes to selecting authors my emphasis is on selecting new writers who need visibility. For example, recently, we provided our platform to Santhali literature- something very rare in other festivals. Yes, big writers too get prominence and I do concede that mid-level authors sometime feel neglected.

In an interview with Cine Ink, Sanjoy K. Roy said: We finalise our list of speakers keeping in view the local readers, audiences and atmosphere.

After organising successful editions of JLF in New York, Colorado , Australia and other places, we are getting requests from Iceland, Mozambique, Italy, Malta, Spain, Germany and other countries to hold JLF their countries.

We do a bit of strategic thinking before finally taking JLF to new places. We discuss, what are the places where the dialogue is very important, where there’s a difference in understanding migration, diversity, clash of civilisation.

JLF has given birth to 123 literature festivals across the world, ranging from Berkley, California, London to Nepal, Bhutan and Sri Lanka. From the logistics point of view, organising JLF is a mammoth task.

Half a million people turned up to attend JLF in Jaipur. 61% of our audience is below 25, said Sanjoy K. Roy.

2018 marks the fifth anniversary of the Festival’s presence in London. The producers, Teamwork Arts along with co-directors Namita Gokhale and William Dalrymple have curated a bespoke programme for UK audiences featuring dialogue and debate from across the South Asian region, highlighting its cultural and social diversity and shedding new light on its current relationship with the UK, according to a press release issued by JLF.

In a press release, issued by JLF@BL said:

At the Inaugural Address: Imagining Our Worlds on Friday 8 June, Managing Director of Teamwork Arts and producer of the ZEE JLF at The British Library, Sanjoy K. Roy, welcomed a packed house of attendees. He commented, ‘London is the capital of the arts world and it was important for us to set up a platform here to bring together authors to debate and discuss, and most importantly to dissent. It is through dissent that we create some kind of dialogue, and have a sense of everybody’s point of view being expressed.’

Festival Co-Director Namita Gokhale said it was an ‘emotional moment’ to see the opening of the festival at the British Library after all the hard work of the year. She quipped, ‘Whatever part of the world you’re in, it’s confusing these days, but we welcome you to three days of journeys across time and space.’

Festival Co-Director William Dalrymple observed that the ZEE Jaipur Literature Festival is the largest literature festival in the world, with over half a million footfalls recorded this year, reflecting that the festival’s achievement lay in the fact that it provides democratic access to a spectrum of speakers unprecedented under one roof.

The Opening Address – India Sutra: Why I Am A Hindu featured Indian writer and politician Shashi Tharoor in conversation with Namita Gokhale. Tharoor discussed the difference between the ‘vision’ of Hinduism and the ‘social practise’ of Hinduism, which he claimed is often ‘distorted’ for political means. He claimed that it is ‘wrong and distorted’ to use Hinduism politically, and ‘there is the need to reclaim Hinduism’ for its vision as a faith, ‘with ideas of life and purpose of this planet.’

Tharoor also emphasised that ‘Caste is not intrinsic to Hinduism as a religion. Caste is abominable, discriminating against human beings.’ He urged people to stop seeking ‘spiritual sanction’ for abominable behaviour, and pointed out that ‘everyone has the right to be angry if they have suffered discrimination. Those who haven’t, have an obligation to help them get over that anger and be allowed to live decent human lives.’

2018 marks the fifth anniversary of the Festival’s presence in London. The producers, Teamwork Arts along with co-directors Namita Gokhale and William Dalrymple have curated a bespoke programme for UK audiences featuring dialogue and debate from across the South Asian region, highlighting its cultural and social diversity and shedding new light on its current relationship with the UK.

Key highlights for the weekend include

Saturday highlights include Jan Nisar and Kaifi where Bollywood power couple Shabana Azmi and Javed Akhtar discuss the poetic heritage that runs in their blood, and Girls are Coming Out of the Woods with dancer-writer Tishani Doshi, one of India’s most acclaimed young poets, performing a striking piece of dance poetry. Elsewhere, in The Storytellers Preti Teneja, author of the acclaimed novel We That Are Young, a modern Indian re-interpretation of Shakespeare’s King Lear, speaks alongside Anuradha Roy, author of the anticipated new novel All the Lives we Never Lived.

Urban issues are explored in Waste of a Nation focusing on the pressing matter of garbage and growth in India where Robin Jeffrey, author of Waste of a Nation, features in conversation with American investigative journalist Katherine Boo; and in Gardens of Paradise, presented by the Aga Khan Foundation, which explores the social function of the traditional Islamic garden and the role of this model in contemporary architecture.

Saturday also features debates on several contemporary political issues. In the wake of Brexit, The Commonwealth of Nations features a panel of political experts discuss the changing role of the Commonwealth and the part that countries like India might play in coming years. The panel on Himalayan Connections discusses the geopolitical jigsaws of the Himalayan region and in Two Koreas: Fact and Fictions Suki Kim shares stories from her gripping and rare first-hand account of living and writing undercover in North Korea.

Cricket and Nationalism, featuring retired English cricketer Mike Brearley, examines how political tensions in South Asia have transformed the nature and personality of the game. Exile and Insurgency considers how to provide the full picture of such conflicts in the Middle East and Myanmar by getting close to insurgent groups and resistant fighters.

Historical discussions include 100 Years of Suffragette, featuring Anita Anand, author of a biography of Indian princess Sophia Dalip Singh, goddaughter of Queen Victoria as well as a committed Suffragette. Railways and the Raj explores the chequered historical role of the rail network in India, featuring railway historian Christian Wolmar, while in Ideas of Democracy examines definitions of democracy that are under question around the world.

Musical elements include a performance by London based singer songwriter Deepa Nair Rasiya and a discussion about the lost ragas of the Mughal Empire featuring Katherine Butler Schofield.

Sunday features the rare UK public appearance of Anita Bose Pfaff, the daughter of Netaji Subhas Chandra Bose, one of the leading figures of India’s independence movement. In Subhas Chandra Bose’s Death: Fact and Fiction Pfaff speaks alongside London-based journalist Ashis Ray, author of a new book that aims to settle the mystery surrounding Bose’s death, which has been subject to national debate for over 70 years.

In Churchill: Hero or Anti Hero, the legacy of Winston Churchill, one of history’s most divisive figures, is explored by David Edgerton, Kwasi Kwarteng, Shashi Tharoor and Zareer Masani.

In Initiations: Writing Race, writer and TV journalist Nikesh Shukla discusses new novel The One Who Wrote Destiny, which captures the immigrant experience in the UK through three generations. He speaks alongside acclaimed British-Zambian poet Kayo Chingonyi, whose collection of poetry Kumukanda was recently awarded the Swansea University Dylan Thomas Prize 2018.

Scenes from a Marriage features Tamil novelist Meena Kandasamy discussing her latest novel about domestic violence, When I Hit You, which was shortlisted for the Women’s Prize for Fiction this year. In Shabana Azmi: The Word Set Free the actress and activist speaks to film director Sangeeta Datta about her work in experimental and mainstream cinema, and the interplay of culture, entertainment and politics.

Questions of contemporary identity are tackled in sessions like Islam and modernity, which looks at the Muslim divorce practice of triple talaq that has recently been deemed unconstitutional by the Supreme Court of India. Culture and Continuity: Sites of Memory examines how histories, material culture and social ethnography can be showcased through real and virtual spaces, featuring the head of Google’s Cultural Institute Suhair Khan.

Music continues at the festival, with sarod virtuoso Somjit Dasgupta taking audiences on a journey on strings through four centuries, as well as a performance by sitar player Azeem Ahmed Alvi.