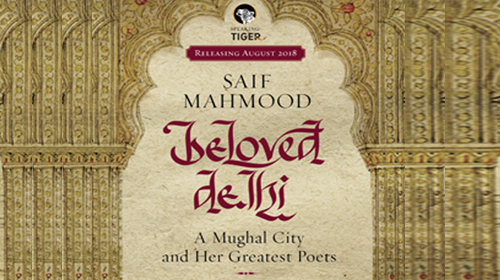 London. At an event organised by Cine Ink in London, eminent writers and broadcasters got a chance to have a first glimpse of Saif Mahmood’s forthcoming book ‘BELOVED DELHI’ – A Mughal City and Her Greatest Poets. The book cover was unveiled by by Jay Vishvadeva, Director, Sama Arts Network, Mahmood Jamal, filmmaker, Neelima Dalmia Adhar, author, Hasan Suroor, journalist and Achala Sharma, broadcaster.

Cine Ink has filmed an exclusive interview with Saif Mahmood.

‘BELOVED DELHI’ – A Mughal City and Her Greatest Poets encompasses the capital of India and its socio-political situation of the time when great Urdu poets were penning their incredible poetry.

Delhi is not just a city; she is a phenomenon. She lurks in the shadow of a thousand stories weaved around her ethereal past. Her chaotic streets, her unruly traffic, her polluted air, her aggressive inhabitants and their hurried life – all form an integral part of the marvel we today know as Delhi. Intrinsically intertwined with the city’s present is her violent history – a history of invasions and assaults. Each time she was razed, she came back to life and resurrected herself with startling vivacity. Gloomy and heart-rending, her past paints gory pictures of massacre and carnage. Struggling to breathe under this angry façade is a timeworn megalopolis teeming with art, heritage and poetry – the Delhi of Mir and Ghalib, the Delhi of the fabled Seven Cities. It was Mir who said :

My heart and my Delhi, though both are ruined There’s a distinct delight in this wrecked house too

In the mid eighteenth and nineteenth centuries, while Delhi was plundered and pillaged by invaders, Indian monarchy was plunging into a disgraceful eclipse and the precincts of the Mughal Empire barely extended beyond the Red Fort – Delhi’s Qila-e-Moalla – the city was playing capital to a parallel kingdom – the Kingdom of Urdu poetry.

Delhi is today home to more than 25 million people. In the north east of the central district of Delhi lies Puraani Dilli (Old Delhi), the city built by Shah Jahan about five hundred years ago. Peeping out of its narrow nooks and crannies through a bustling crowd of noisy shopkeepers, haggling customers and cursing rickshaw-pullers is a 300-year old story; the story of one of the most evocative languages ever known to humankind – Urdu.

What was this bygone era all about? What was happening in that era in Mughal Delhi? A narrative is never more enchanting than when in verse, they say. The times we live in, the dreams we see and the heartbreaks we go through resonate in the songs we sing and the poetry we hum. Should we then not make an effort to peep into those times through the lens of their songs and poetry ?

The book is different in that it will be the only book in English which will not only document the lives and times some of the greatest and most popular classical Urdu poets of Delhi but will also chronicle the Delhi of their times. In attempting to do so, Saif uses actual photographs taken by photographer and film-maker, Anant Raina, of the places where these poets lived, composed, recited, performed and died – as they exist today. Again, these photographs not only illustrate and explain the narration in each chapter but also help in visually connecting the reader to the lanes of Shahjahanabad, which these poets had walked. In addition to documenting their lives and putting the poetry of these great poets in perspective, the idea is also to help readers physically visit the present-day reincarnations of areas and localities where they lived and drown themselves in poetic history.

The book begins with a foreword by the foremost literary historian, Dr Rakhshanda Jalil and a fairly comprehensive Prologue on the Literary history of Delhi’s Urdu by the city’s grand story-teller, Sohail Hashmi. This is followed by a 5500-word Introduction by the author where he gives a bird’s eye view of the cultural and literary history of Mughal Delhi and walks you through its lanes. The Introduction is followed by eight chapters – one each on the eight poets named below. The book ends with a short epilogue suffixed with a selection of the best verses of the poets it covers.

Each chapter is biographical in nature, taking the reader through the life and works of the poet while documenting his brief ancestry and the culture and society that he lived in. Each narrative is weaved around anecdotes taken from duly cited credible sources. For each poet, the author quotes the poet’s original Urdu poetry with the author’s own translations into English. While doing so, he not only explains the verses quoted but also gives the background, context and story behind them. As explained above, each is interspersed with actual photographs of the places where these poets lived, composed, recited, performed and died – as those places exist today. The book has a word count of about 85,000 words. The poets covered in the book are :

Author: Dr. Saif Mahmood is a New Delhi-based literary personality, poetry and literature critic, commentator, translator and rights activist. An Advocate of the Supreme Court of India, holding a doctorate in Constitutional Law in South Asia, he frequently appears before Superior Courts in India as well as in international and domestic tribunals.

An itinerant traveller, a bohemian raconteur and a globetrotting dreamer with his heart in poetry and mind in law, Saif speaks and writes on diverse issues, ranging from law to literature and is associated with a number of academic, legal, professional, and literary organizations around the world.

Founder of South Asian Alliance for Literature, Art & Culture (SAALARC), Saif is a frequent face in literary events and television discussions and regularly speaks on varied platforms the world over. His works have appeared in various prestigious publications and his English translations of Urdu poets have been applauded the world over.

He is a leading South Asian name in the literary world and globally known for enthralling audiences with his passionate recitations, especially of such progressive poets as Faiz, Majaz and Sahir.