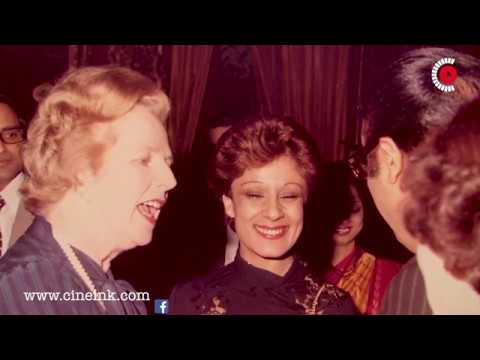 Veteran BBC Broadcaster Rajni Kaul, 90, tells Cine Ink her husband Mahendra Kaul, former BBC broadcaster, had a heated verbal dual with India’s Prime Minister, Morarji Desai, during the course of an interview in the late 1970s. She also reveals that as far as she is concerned it was not a secret that her husband Mahendra Kaul used to flirt with the then Prime Minister of the UK, Mrs. Margaret Thatcher.

She opens up about her life in conversation with her her fellow broadcaster, Pervaiz Alam. She regales her audience with amazing stories from her career, starting from All India Radio to the BBC Hindi Service in London.

As Rajni Kaul shares fascinating anecdotes from her life of which large part was spent in Peshawar, Delhi, Washington and London.
Above all, Rajni says with a huge sense of pride, she will always remain a Peshawari girl. She gets emotional the moment Peshawar is mentioned. Her voice chokes and she starts reminiscing about her childhood that was spent in Peshawar.

Rajni Kaul was the first woman to join BBC Hindi Service as a staff member in 1961.

This interview, broadcast in two parts, was recorded in the month of August, 2019, at Rajni Kaul’s apartment in London.