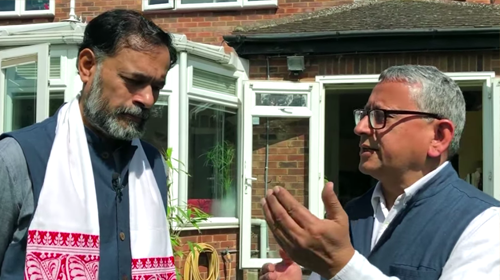 Yogendra Yadav on Why the Idea of India is Under Threat

One of India’s leading political analysts, Yogendra Yadav has said that the idea of India is in grave danger. In today’s context, he says, this threat is not merely limited to politics, legislature or any person per se, but to the complete image of India as envisioned in the freedom struggle and as embedded in our constitution. Sana Rashid reports:

In a wide ranging interview with Cine Ink’s Pervaiz Alam, Mr. Yadav explains the idea of India as one that encompasses three Ds – Democracy, Diversity and Development. Democracy meaning democratic rights reaching the last Indian; Diversity meaning being proud of our diverse appearances, practices and culture; and Development meaning wiping away the tears of the last Indian.

Further, Mr. Yadav says that although all these components have been challenged in one way or the other in the last 60 years, the alarming fact is that, for the first time in the history of India, all three are together being challenged at the same time and require immediate protection.

Mr. Yadav feels that Adharma has been happening in India for the past 60 years in one way or the other, notable being Emergency, 1984 anti-Sikh riots, Hashimpura incident, etc. But that was something that the governments later admitted as wrong doings and apologised for the same as well. And this is where it differs from Vidharma, which has been happening in the last four years.

He then goes on to say that Vidharma means unabashedly and brazenly doing wrong, looking into public eye and saying, “We will do it.” Mr. Yadav exemplifies this by saying, “When you say Veer Savarkar is a hero, when you put up statues of Nathuram Godse, you openly challenge the idea of India.” When people in power are brazen enough to challenge the very core of our democracy and shake the foundation of our constitution, this type of threat is not limited to any party or person but engulfs the entire country.

Mr. Yadav also explains how the last four years have witnessed continuous raging attacks on India’s Dharma/Swadharma. Strong institutions such as judiciary, legislature, democracy and media are being threatened and bullied with such fervour that was never seen earlier and that is mainly because the head of the country, Mr. Modi controls the three Ms – Money, Media and Management.

When asked if there was any way to counter such threats, Mr. Yadav said that for the next eight months, there are only two alternatives in this country – Youth and Farmer vs. Hindu and Muslim. One of these two would be played as an election card and the result of the next election will depend upon the dominance of one over the other. He also says that anti-incumbency against the Modi regime has just kicked off but at every step of the movement, the hand that rocks the three Ms would continuously be at work in countering any such dissent.

Yogendra Yadav is the founder-president of Swaraj India – a Political Party which promises to usher in probity, transparency and accountability in electoral politics. He wears many hats: is a psephologist, political analyst, academic and a full time politician.