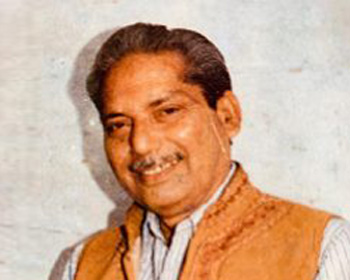 Mehr-e-Alam Khan remembers the man whose Urdu couplet made headlines  on the Budget Day.

(If there is belief, there opens a way – sheltered behind the wind also burns the lamp)

The Finance Minister, Nirmala Sitharaman, touched my heart as she recited the above couplet by my friend and poet, Manzoor Hashmi (b. Badāuñ 1935 — d. Aligarh 2008) from Aligarh Muslim University, while presenting her first Budget 2019 in Indian parliament on 6 July, 2019. She just evoked my nostalgia.

Manzoor Hashmi was a good poet of the Urdu language but could never enjoy a national fame, though he deserved it the most. Today, almost, every newspaper has published his couplet, much to the delight of his family and friends. I am among them.

I thought I would take the liberty of suggesting another beautiful Urdu she’r penned by Manzoor Hashmi, complimenting your party’s slogan of achháy din (good days):

(If there remained branches then they would also bear fruit and leaves, if these days are bad then the good ones will also come)

The greatness of poets such as Faiz and Ghalib lies in being quoted by the left as well as the right of the centre, with amazing fervour.

This is not for the first time that Urdu poetry has been recited by our political leaders, even by those not well versed in the language, irrespective of their party affiliations in the parliament. Urdu poetry has often been the favourite tool of most of our ministers and even prime ministers to put forth their points effectively.

Just, last week, Prime Minister Narendra Modi recited an Urdu she’r to take a swipe at senior Congress leader Ghulam Nabi Azad, who had earlier asked the BJP government to “keep their new India to themselves” and return our “old India.”

Replying to the Motion of Thanks to President’s Address in the Rajya Sabha, Mr. Modi quoted an Urdu couplet attributing to the one and only- Mirza Ghalib.

Later, it turned out that Ghalib never wrote the aforementioned couplet. But the intent was good.

In March, 2013, the then Prime Minister Manmohan Singh recited Ghalib to highlight how the BJP had made unwarranted attacks on his government by using “choicest abuse”.

Dr. Singh found his perfect match in Sushma Swaraj, senior leader of the BJP, when she responded by quoting the Urdu poet Bashir Badr:

(There must have been some compulsions, one is not disloyal for no reason at all).

Let me come back to Manzoor Hashmi’s ghazal, making waves on the net.

Manzoor Hashmi was a thorough gentleman and a very loving friend, as well as a good ghazal poet during my student days at the Aligarh Muslim University in the 1970s.

I came in contact with him through Janab Noori Shah Sahib (an uncle of the famous Indian actor Naseeruddin Shah) and another dear poet-friend (late) Asad Badayuni. For about five years from 1975 to 1980, I would meet Manzoor Hashmi Sahib, Noori Shah Sahib and Asad Badayuni, every evening, either at a bookshop – Maktaba Jamia- or at another bookshop, Educational Book House in the University’s Shamshad Market. We would discuss Urdu poetry, fiction, journalism and at times the politics of the Urdu wallahs.

Manzoor Bhai, as I would call him out of respect, and Asad would share with Shah Sahib their latest couplets, ghazals and nazms.

Some of Manzoor Hashmi’s famous couplets that I still remember are:

His first collection of poetry “Bārish” (Rain), compiled by Asad Badayuni, was published in 1981. He dedicated the compilation to one of his friends and a contemporary poet Salahuddin Parvaiz. His second volume “Āb” (Water) appeared in 1994, dedicated to his “best creations – his five dear children – Masood, Shahid, Rakhshañ Javed, Mansoor and Yasmin.

The Foreword to this collection has been written by Prof. Asloob Ahmad Ansari, a former professor of English at the AMU and a renowned scholar of both English and Urdu literature. Prof. Ansari died at the age of 91 in 2016.

“Manzoor Hashmi is a unique and authoritative ghazal poet who can see eye to eye with any of his contemporary ghazal poets,” he wrote in his foreword.

Manzoor Hashmi is unique as a poet as he is subtle in his expression when he describes world’s beauty and ugliness, richness and poverty. Despite his discontentment with the world, he remained optimistic about his dreams and desires. The variety of subjects he raises in his poetry through his skilful style, including the melody of the words he chooses to express his feelings and observations, makes him so refreshing and different.

As a poet, Manzoor Hashmi does not indulge in self-praise. He shows great restraint over his expression, which always remains balanced. At times, he seems to be introspecting, talking to his inner self. He describes the world around him unkind and yet remains quite optimistic about its future.
In several of his couplets, he empathises with all the marginalised people, striving to making the world a better place to live in.

Born in 1935 at Badaun in Uttar Pradesh, India, Manzoor Hashmi got his graduation and post-graduation from the AMU, and served the University as a librarian in different departments. He retired as Deputy Librarian from the University’s Central library – Maulana Azad Library. He died at Aligarh in 2008.

Manzoor Bhāī, at the end, here is one of your own couplets dedicated to your fragrant memories:

(I don’t know how am I living after parting with them,
We were body and soul to one another).