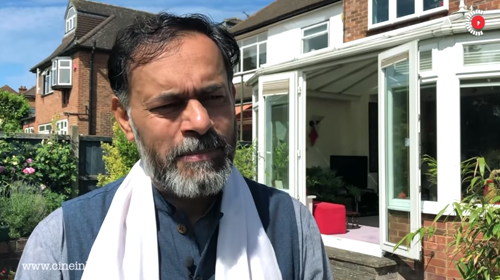 Secularism in India has become a hypocrisy, says Yogendra Yadav

Secularism is the most sacred principle of India’s existence but policy makers, politicians and intellectuals of the country have turned it into an act of hypocrisy, says Yogendra Yadav in an interview with Cine Ink. Supreet Aneja reports:

Yogendra Yadav, the founder- president of Swaraj India, a political party which aspires to usher in probity and accountability, has said that ‘Secularism’ as a core principle of India’s Republic is both sacred and hypocritical. He uses the Hindi word ‘Pakhand’ for secularism. And yet he feels that it’s the key idea without which India cannot thrive as a nation.

In an interview with Pervaiz Alam for Cine Ink, the London based digital platform for news and views, Yogendra Yadav, a politician, psephologist and an academic, says that secularism is a part of India’s Swadharma.

“India has two options, either to be secular in the right terms or forget its existence, as without it, the religious diversity cannot blossom as a unity,” says Mr. Yadav.

He feels that the policies, politics and intellectuals have made secularism ‘fraudulent’. He cites the landmark Shah Bano Case, when Prime Minister Rajiv Gandhi, faced with mounting anger from Muslim groups, used parliamentary procedures to set aside the court judgement. Mr. Yadav explains this is how the politics of secularism has become a tool for the appeasement of the clergy of the minority religions. In a hurry to pacify the orthodox Muslim clergy, the Congress government changed the constitution of the country overnight, he adds.

Yogendra Yadav laments that instead of focusing on deplorable conditions in the education sector, employment and housing discrimination against Muslims, the debate of secularism revolves around symbolic issues like ‘Triple Talaq’ or ‘Urdu’ language being made compulsory or restoration of the minority character of Aligarh Muslim University.

In yet another example of appeasing the clergy of minority religions, he speaks about how the secular intellectuals remained quiet when Shiromani Gurudwara Prabhandak Committee (SGPC), a body to manage the gurudwaras, issued a decree that they will form a censor board deciding the portrayal of Sikhs in films.

Mr. Yadav then goes on to say that during the 1984 riots, it was the consistent efforts of the RSS (Rashtriya Swyam Seva Sangh) to frame a negative viewpoint against Sikhs and gather votes for Rajiv Gandhi in an attempt to fulfil their agenda, which is one country, one language, one religion.

“I am not angry at the RSS but I do pity them as their whole ideology of the supremacy of the race has been imported from Europe,” says Mr. Yadav.

When asked if around 80% majority Hindus can be allowed to have supremacy, Mr. Yadav says that in that scenario remaining 20% minority is close to 25 crore, which is a significant number to be ignored.

He explains, “Democracy is not majority by birth but by the mass participation and opinions.”

Talking about Hinduism, he further explains how the majority religion is diverse in itself, where the practices of Hindus from northern parts of India differ from those of southern parts. Mr. Yadav says, “People don’t understand that India is a country of minorities and no single individual can be a majority in this country, any state, city, or local village or in terms of religion, caste or language.”“Sadly, people feel that secularism is a concession for minorities,” he adds.

Mr. Yadav says, “The entire process of making secularism a dirty word was initiated after the independence, when it was first established as a sacrosanct principle to bring the country together after the partition and bloodshed.”

He says, “The conviction of Nehru and Gandhi changed to convenience as it was a vote bank for parties which ultimately led to compulsion to not let go of votes of minorities and thus conspiracy in secular politics initiated.”

Further, Mr. Yadav says that Muslims, who are a ‘disadvantaged minority’ of the country have been made hostage of this secular politics, initially started by the Congress Party. Later, other parties followed.

Referring to the intellectuals of the country, Yogendra Yadav says that most of them speak English and have failed to initiate a dialogue with the common man. They have also shunned the ideas of religious beliefs of people and traditions, he adds.

He gets emotional when asked about a controversy regarding his name. Though he is a Hindu but his childhood name is Salim- a common name among Muslims. “It is true, something very intimate, and has nothing to do with my professional life,” he says.

He narrates the incident of how his father at the age of eight saw his grandfather being murdered by a Muslim mob in the city of Hisar, Haryana in 1936, where he worked as a hostel warden of a school. Mr Yadav says that his father also witnessed the communal riots of 1947 as well as the plight of Muslim victims. He did not want to live with hatred. He decided to give Muslim names to his children.

Mr. Yadav further shares that in his town Sri Ganganagar, Rajasthan, there were no Muslims in his class. Children used to tease him, and failing to understand the reason he decided to change his name from Salim to Yogendra. But for his family and friends he is still ‘Salim’.

When asked about his party’s political agenda, Mr. Yadav said that he believed in offering an alternative than merely opposing. He says, “We don’t have any money and no organisational political setup or any media support, but we are ready for the new beginning.”

He adds, “One should never forget that anything can happen in politics especially in the present situation. There’s a vacuum as Mr. Modi is losing support whereas Congress isn’t heading anywhere.”