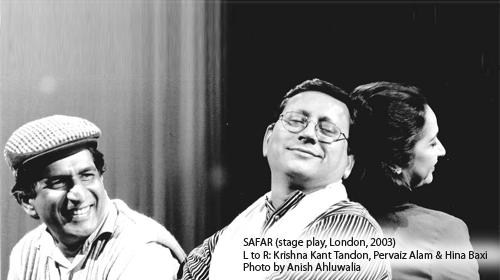 Safar, a play in Hindustani, was first staged in 2003 at the Watermans Arts Centre in London, followed by stage shows in Edinburgh, Birmingham, Leicester and Linbury Studio, Westend, London.

Safar, is a tale of an exodus from imaginary homelands and of perpetual, irrepressible longing for such paradises lost. And of being introduced to the ultimate reality that strolls somewhere in the middle of the heady mix of soft-focussed, sepia-shaded romance of the bygone, the frothy bitterness of its loss, the steely starkness of the present and the unknown of the future. Writer, Director, actor Pervaiz Alam weaves a haunting tapestry that unfolds the saga of double dislocation, hence double the pain – albeit one merely empathised while the other survived.

Woven through the personality of the protagonist Vishal — descendent of a Hindu family that migrates from the Pakistani Punjab to India when the country strikes a “tryst with destiny” in 1947 — is the golden thread of memories. Memories that are not entirely his own, but of his parents; memories of a paradise lost. Vishal is an heir to his ancestors’ trauma, a legatee of the pain that runs like the thickest thread in the tapestry of his being. In the debris of these shattered dreams lurk demons that visit him, haunt him at every turn of the play. He’s a man swamped by history. But, then, can anyone of us exonerate ourselves fully from history.

Vishal’s own outward dislocation from his twice-removed imaginary homeland ushers a new journey within as he arrives in England.

Here he meets up with the two corners of what forms a lasting triangle of his life that continues to veer seamlessly from reality to haze, and from dream to reality. Seema, played by Hina Baxi, the first acquaintance, hails from Benaras. Young and enterprising, her story cuts right through the ideological clutter that fogs Vishal’s genius. For her, her flight from her homeland is a route that elevates her above the archaic mumbo-jumbo of stifling traditions; it’s her chance to dump her cross in the sacred river and swap it for a sparkling new life lead by an engaged ambition. She has blown away the burden of any such irritant residual delusions of her previous life that vex Vishal. The third corner of this triangle is ebullient, Tariq played by KK Tandon, a Pakistani immigrant completely surrendered to a lifetime of ‘so whatism.’

With the interplay of past, present and future with the psychology of the three individuals the stage is set for a fascinating, striking and disquieting tug of war of ideas, survival and indeed, emotion. It is during this tension that Vishal, played by Pervaiz Alam unfurls in an intense performance, the poignant picture gallery of his ancestors’ smouldering Eden, the land of plenty and abundance described by his father, that he at once loves and bemoans. It is a memory that he is sentenced to cling on to.

Occasionally, ‘Safar’ defies all conventions, takes risks that almost knock the breath from you and emerges as a masterpiece that haunts the memory. Enlivened with dark unsparing cynicism, loaded with dramatic irony and stewed in a simmering cauldron of social satire, its mood changes with a ferocious climax.

As a human story, it is compelling. There is no false sentiment, and as a statement, it does a fine job of clubbing down many a high altar of shallow partisanship throwing ‘political correctness’ against the wall.

Pervaiz Alam gives a disturbingly accurate performance as the man swamped by history. His emotional turmoil becomes tangible when he suspects behind Tariq’s chirpy, feisty façade, much darker shades of the primal savage by the bush, who drove his ancestors out of their paradise. We follow his journey filled with sorrowful longing for the good old days, incorrigible nostalgia; with dreams, and nightmares.

Towards the end of the play, just when Vishal, now seen, as an old and a fragile spectre of his youth, is resigned to the thought that his demons have silenced, a revelation about his next generation wakes them all up, the full force from their deceptive slumber.

KK Tandon and Hina Baxi excel in their grim realism that evokes the tensions and tragedy of the time with powerful directness. Pervaiz’s is a narrative that is high voltage and his is a performance that is full of fire. He is an artist who feels instinctively and expresses himself without inhibitions. As a Director, however, he’s sympathetic to his characters for all his fire and fury and does not despair of humanity.

Despite a historical context to the subject, the playwright succeeds in creating a psychological time and space within which the conflict between fear and the basic human need for bonding and love is acted out. Pulsing in the narrative is Parvaiz Alam’s reflection on the ruinous consequences of an incident that happened over half a century ago. Yet, it continues to stir tempests in the minds and hearts of the survivors. But his emphasis is on the pointless insistence of the flux of this fiery river of time.

At its core, ‘Safar,’ also seems to be asking some primaeval nagging questions that we all much rather avoid than ruminating upon – are we, the humans, fallen angels or risen chimps? Why must all ideas of an ideal life-world, nations, idylls and havens be built on separation and rejection? Are we at all the light bearers of goodness as we make ourselves out to be? Or beneath our hallowed shrouds, we remain a bunch of petty, self-centred primordial cavemen?

Mercifully, Safar offers no answers. There is just the hint of a gleam, a reluctant, flickering one that merely underlines the journey and the loss.

That said, ‘Safar’ emerges as a mesmerising work of art that ultimately offers a paradigm of life, just as it is. It celebrates life, and though it expresses grief for the death of a distant dream, it remains no less concerned with rebirth than with the inevitable death.

One is reminded of Urdu writer Manto’s tour de force short story, ‘Toba Tek Singh,’ that recounts an exchange of lunatics between asylums in Pakistan and India that takes place just after the Partition. This fictive lunatic exchange comments on the historical madness that obsessed the public at the time of the Partition itself, when around a million people were slaughtered during the great communal migrations.

It wouldn’t be wrong to say that ‘Safar,’ takes the whole debate a stride further to where Manto’s ‘Toba Tek Singh,’ leaves us, like the first kiss, pining and exasperated for more.