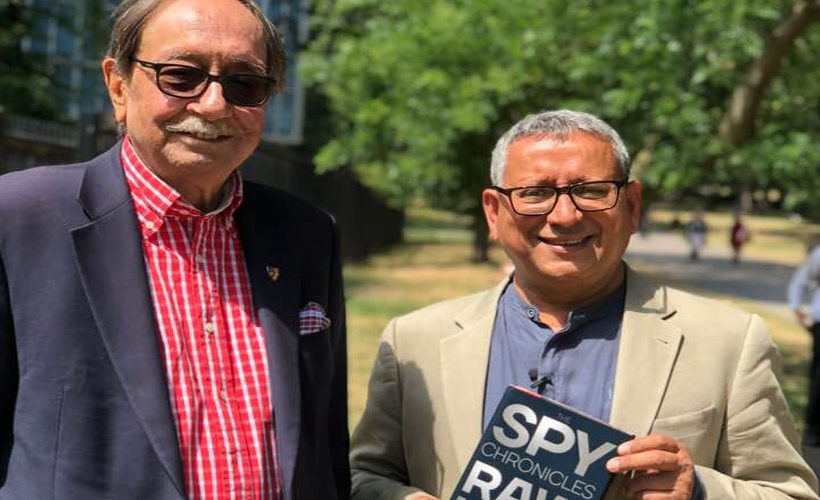 A.S. Dulat, former chief of India’s foreign intelligence agency, Research and Analysis Wing (R&AW or RAW), predicted Imran Khan as the Prime Minister of Pakistan much before the 25th July Pakistan elections. He also said, once Imran Khan becomes the PM, there would be a dialogue at the top level between India and Pakistan, just before the Indian elections, scheduled in 2019. Supreet Aneja reports:

Being part of the establishment for almost 40 years does help when one has gone through the script again and again. Mr. Dulat is spot on as he analyses the status quo between Pakistan and India. In fact, he admits that status quo does not suit Indian interests.

In an exclusive interview with Pervaiz Alam of Cine Ink, A.S. Dulat, while suggesting a comparison of PM Narendra Modi to the US President Donald Trump, says that PM Modi could initiate a dialogue with Pakistan akin to President Trump’s meeting with the North Korean Leader, Kim Jong-un, in Singapore.

He predicted Imran Khan as the PM of Pakistan in this interview with Cine Ink which was recorded on 12 July 2018 in London.

“I feel that future talks should be institutionalised so that they continue regularly,” adds Mr. Dulat.

When asked about the invitation extended to former prime minister of Pakistan, Nawaz Sharif, for attending the swearing in ceremony of PM Narendra Modi, Mr. Dulat admits that it was a good move by PM Modi. But the Pakistan Army didn’t like it, he adds. Mr. Dulat also supports PM Modi’s surprise visit to Lahore for a meeting with his Pakistani counterpart Nawaz Sharif on 25 December 2015, but he laments the fact that everything came to a standstill after that.

Mr. Dulat suggests that the peace talks would have continued, but the Pathankot Attack in January 2016, followed by the Uri Attack in September 2016, heightened the tension. He feels that the widely publicised India’s surgical strike against Pakistan on 28 September 2016 added fuel to the fire.

“Conditions in Pakistan are worse than ours due to rampant acts of terrorism,” adds Mr. Dulat.

When asked about a common perception in Pakistan that RAW was fomenting trouble in their country, he replies that General Asad Durrani once told him, “If RAW is not doing anything in Baluchistan, I would be very disappointed.” To which, Mr. Dulat said, “We are not doing anything particular.”

After finishing his tenure as the Chief of RAW, Mr. Dulat served as an advisor on Kashmir during Prime Minister Vajpayee’s time from 2000-2004. He says his mandate was to ensure maximum participation and free and fair elections in Jammu and Kashmir in 2002 which he did.

General Asad Durrani, who was also expected at the event in SOAS (School of Oriental and African Studies), University of London, was absent.

Mr. Dulat informs that Mr. Durrani was put on the ECL (Exit Control List), a border control list maintained by the Government of Pakistan to prohibit people in the list from leaving Pakistan. He explains, this happened after he was refused a visa from India High Commission in Islamabad for attending a function of the book in Delhi on May 23 which was attended by former prime minister, Dr. Manmohan Singh and former vice president, Mohammad Hamid Ansari.

While criticising the denial of visa to Mr. Durrani, co-author of the book, adds that due to escalating tensions between the two countries, getting a visa from both the sides has become difficult.

Mr. Dulat has a dedicated chapter in his book, “Deewangi Khatam”, discussing the possibility of a book by the chiefs of two intelligence agencies of the two enemy countries.

“It was completely unprecedented,” he says, “as never two intelligence agencies between any two countries could have written a book together.”

Mr. Dulat calls his book a continuation of his previous book, ‘Kashmir: The Vajpayee Years’ published in 2015. In that book, he says he had written about the need for a dialogue and through this book he initiated that dialogue.

When asked about the challenges faced as he met his counterpart from the ISI, he says that it was a very cordial and friendly atmosphere. He says that even the disagreements between the two were agreed upon by both and they accepted each other’s view.

Further, A.S. Dulat admits that he did represent the Indian establishment and its view for 40 years. However, he left the agency (RAW) 18 years ago and the government 14 years ago, he says.

“I have learnt a lot in these 14 years that I couldn’t have in 40 years,” adds Mr. Dulat. He compares himself to a free bird.

A.S. Dulat has high regards for the former chief minister of Jammu and Kashmir, Dr. Farooq Abdullah. “Farooq Abdullah is the only Leader in Kashmir, others are just pygmies,” adds Mr. Dulat.  He feels India was unfortunate that it failed to leverage his leadership to her advantage.

In the chapter, ‘Forge Structure or Break Ice’, Former RAW Chief offers his suggestions on solving the Kashmir issue in detail, starting with the four-point formula supported by the former Army Chief and President of Pakistan, General Pervez Musharraf.